How to Build a LEGO SpaceX Falcon Heavy Rocket - Part 1

In Part 1 I covered how to find and buy the parts you will need to build this LEGO SpaceX Falcon Heavy Rocket. In this post, I will cover the build process and review the actual model.

But first, if you are not familiar with SpaceX I highly recommend watching this short 2 min clip of the Falcon Heavy debut flight in February 2018:

Now that all the parts have been delivered and checked, we can start building it. 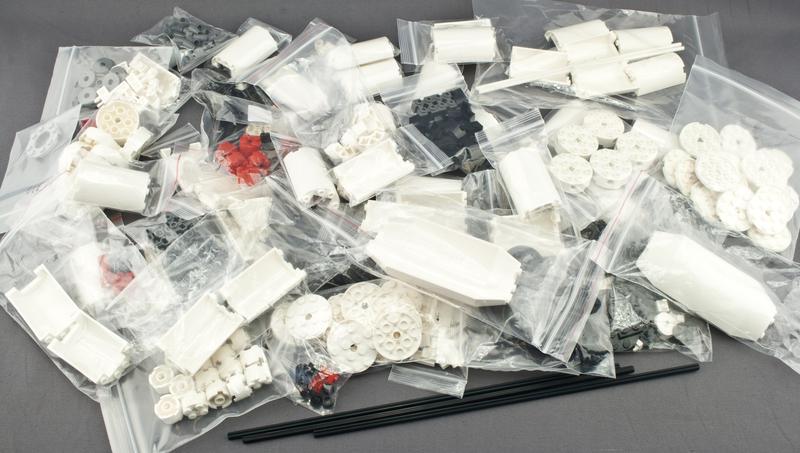 As mentioned in Part 1, the list of parts utilises [No Color/Any Color] parts for anything internal that can't be seen. As you can see below, I ended up buying a mixture of colors for them based on whatever Rebrickable showed me was cheapest: 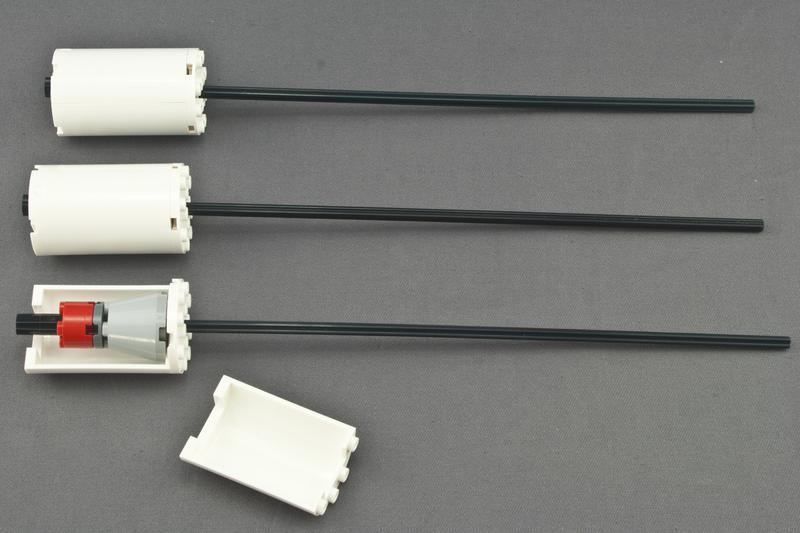 The build has many of these internal parts, used to give the rocket cores strength. 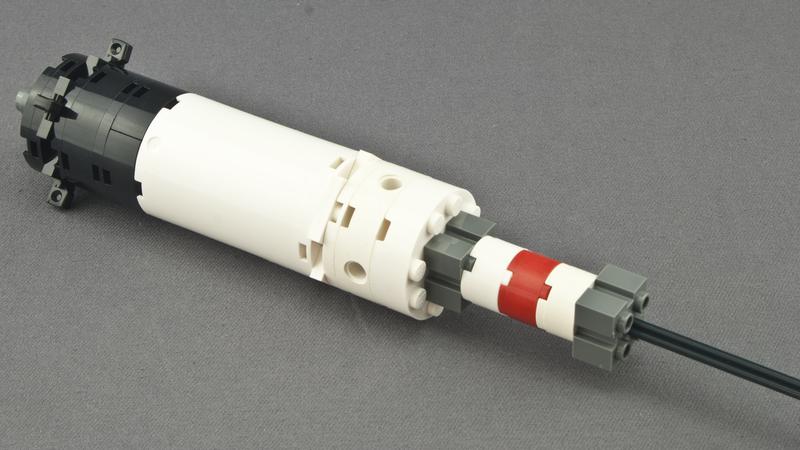 There isn't a whole lot to it, and the build finishes pretty quickly. All three cores are built together while they have similarities and then you switch to just the two side boosters. Add the top nose cones, gridfins, Merlin engines and landing legs to finish them off. 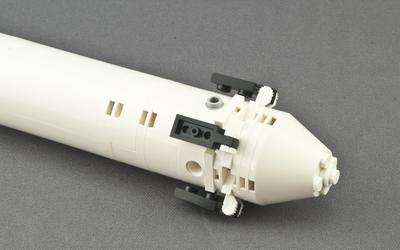 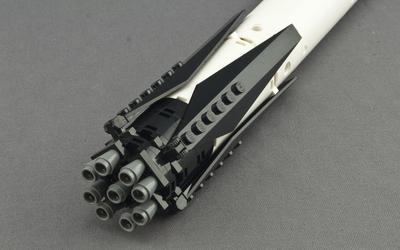 The two side boosters are identical as expected. Despite their long skinny nature, they are quite strong and easily handled. 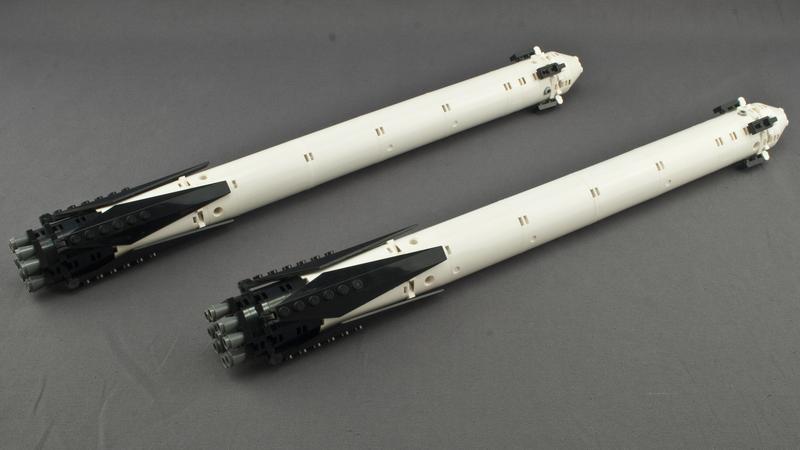 I love how the landing legs can be folded down to stand the rocket upright. However, I had some problems with one of the cores not wanting to stand on surfaces that were too smooth. I suspect the parts used by those legs were a bit too used and loose (I buy a mixture of new and used parts to save on costs). 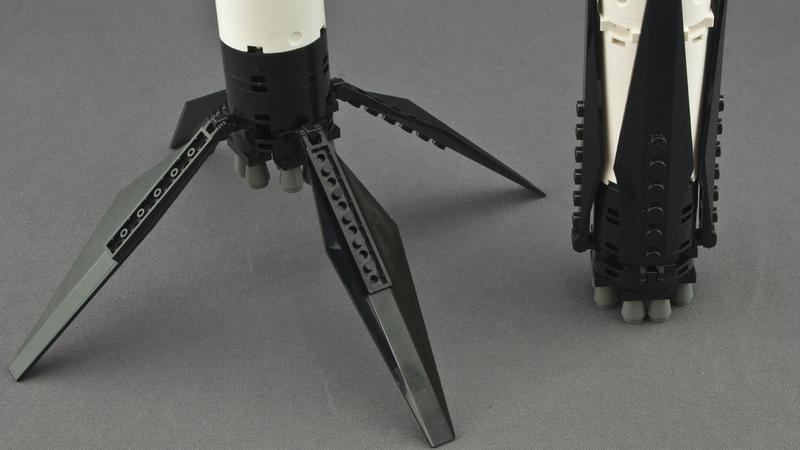 The centre core and interstage is built next. 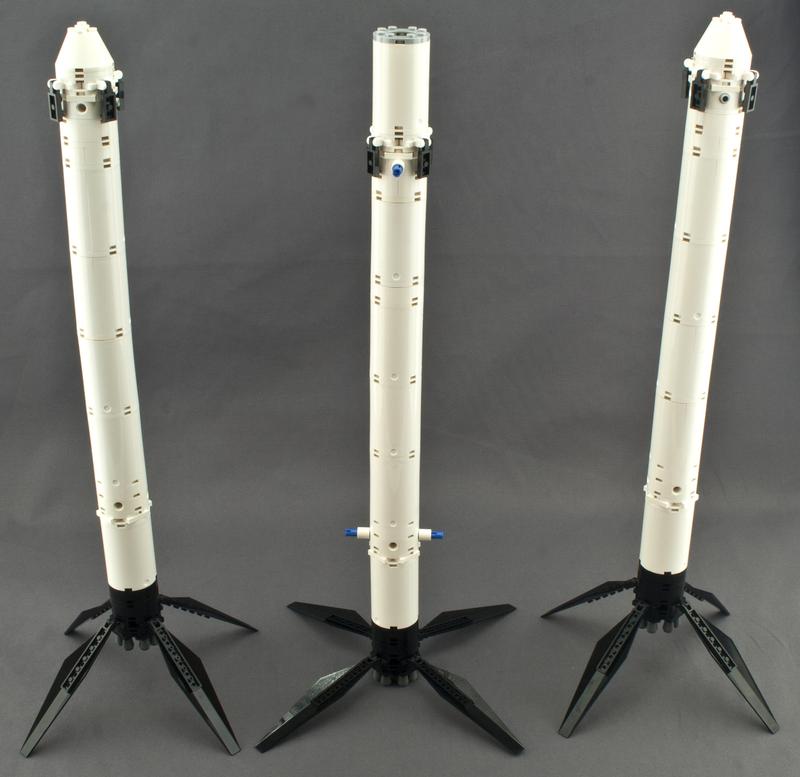 You are given two options for the inter-core connections. You can use 2 x 75c10 80mm tubes, or cut a single 75c24 to get two slightly longer parts for a better fit. The designer recommends cutting the longer part and that's what I did. It felt so wrong :( 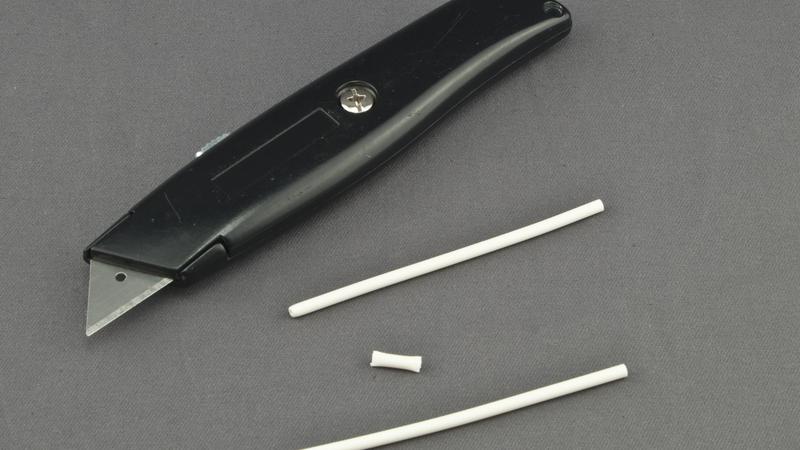 Next up you build the second stage with it's fairings.

The second stage slips easily into the top of the interstage. While it is connected and won't fall out, you can also remove it easily.

Eiffleman actually provides instructions for two different payloads - a stack of satellites typical of Falcon 9 launches, or a Tesla. It wasn't a fair choice really, but I guess you can build both if you want. I haven't included the Tesla parts in my Custom List but they are easily found from the provided building instructions. I actually made a small design change to make it easier to buy the required parts. 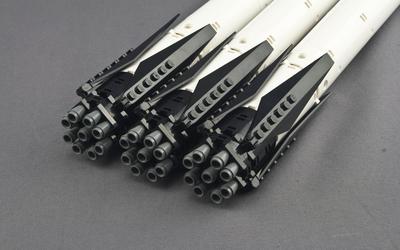 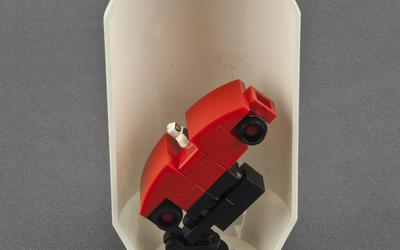 One more thing I love about Eiffleman's LEGO Ideas entry is that he provided designs for the stickers. While I usually don't apply stickers to LEGO sets I build, this rocket is going to be a display piece and the stickers just make it look so much better. I just printed directly onto some adhesive label sheets I had lying around. The color of the paper doesn't match the white of the LEGO parts, but from a distance you can't notice. 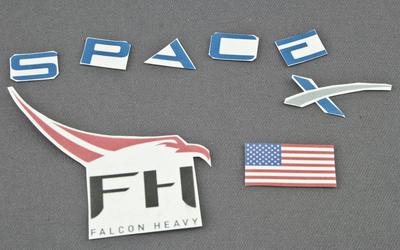 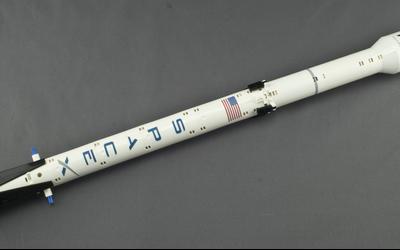 The completed parts of the rocket, disassembled. 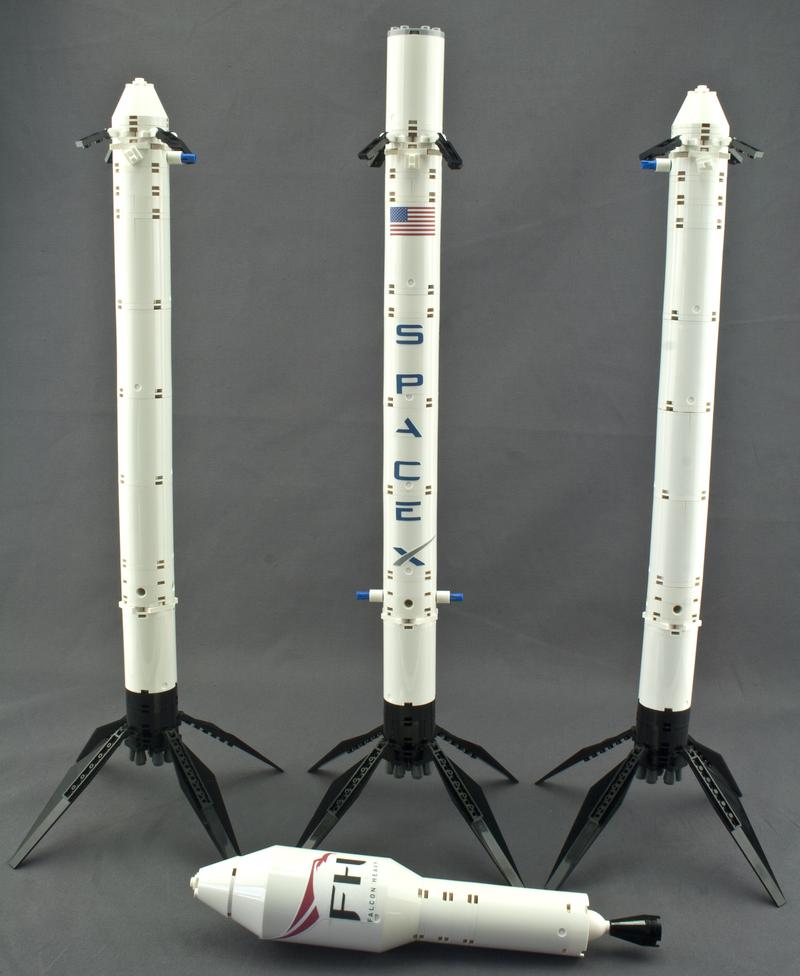 And assembled. It looks better standing up, but it's easier to add horizontal photos to a web page :) 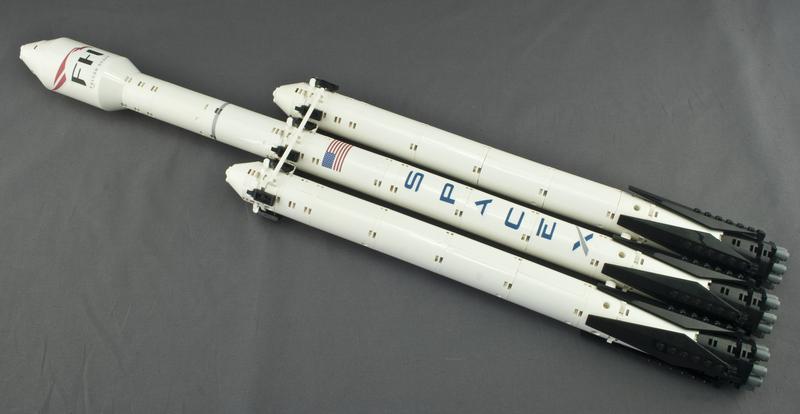 Apparently it is in the same 1:110 scale that the Saturn V rocket is, and standing them next to each other reminds me how ridiculously huge that thing was: 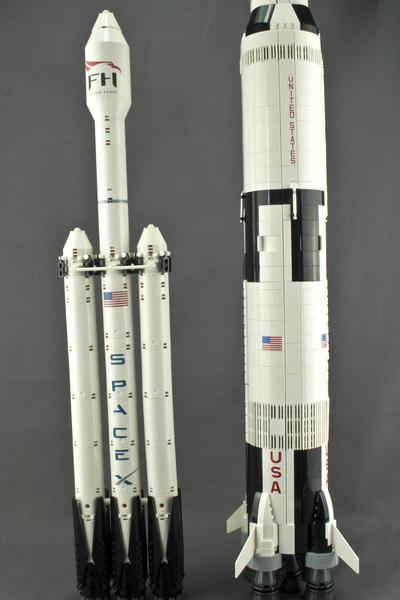 In terms of accuracy, the most obvious difference between this model and the real Falcon Heavy is the colors. The first one to fly (and as of writing, the only one) had the older white landing legs. However, the 57906 leg parts don't come in white, and considering future versions of the Falcon Heavy will have black landing legs I prefer them black here.

Future flights of this rocket will also have a black interstage (the center core part between booster and second stage). Replacing the large 85941 panel parts is easy except for the fact it is very rare in black, and hence very expensive. You could just replace them with several 87081 parts though. I'll probably give that a go in the future when the new version starts flying.

After starting this process, I found several other models that I liked:

MOC-17641 - This Falcon 9 rocket uses Block V colors and could easily be adapted to a Falcon Heavy. I like how the legs have the more accurate triangular shape due to the extensible pistons, however they must be manually removed when folding up the legs.

MOC-19440 - Uses rotating inter-core cross braces which is a bit more accurate, and Block V colors. The booster cones are not in black, but I think there were some earlier SpaceX renderings that showed them that way.

SpaceX Ultimate Collection - A LEGO Ideas project that reached 10K votes but disappointingly did not pass review. It looks great, and comes with TEL, Dragon and Tesla models. However, there are no instructions.

So, it cost me about AU$120 to buy and deliver the nearly 400 parts. They came from 5 stores all over the world and took 4 weeks. Buying individual parts is definitely more expensive than buying a boxed LEGO set. Compare with the Saturn V which costs $170 for 1969 parts (heh), we are looking at an average of 30c/part for the MOC vs 11c/part for the Set. However you can't buy a Falcon Heavy in a box yet, so we have no choice!

The build was very straight forward, and the model is very sturdy. After adding the stickers, the final model looks awesome.